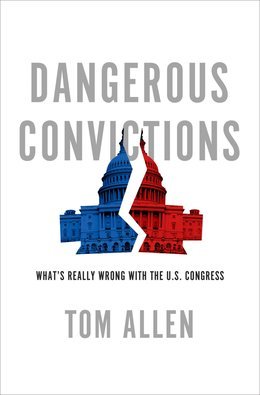 The rhetoric of the 2012 presidential campaign exposed the deeply rooted sources of political polarization in American. One side celebrated individualism and divided the public into makers and takers; the other preached better together as the path forward. Both focused their efforts on the base not the middle. In Dangerous Convictions, former Democratic Congressman Tom Allen argues that whats really wrong with Congress is the widening, hardening conflict in worldviews that leaves the two parties unable to understand how the other thinks about what people should do on their own and what we should do together. Members of Congress dont just disagree, they think the other side makes no sense. Why are conservatives preoccupied with cutting taxes, uninterested in expanding health care coverage and in denial about climate change? What will it take for Congress to recover a capacity for pragmatic compromise on these issues? Allen writes that we should treat self-reliance (the quintessential American virtue) and community (our characteristic instinct to cooperate) as essential balancing components of American culture and politics, instead of setting them at war with each other. Combining his personal insights from 12 years In Congress with recent studies of how human beings form their political and religious views, Allen explains why we must escape the grip of our competing worldviews to enable Congress to work productively on our 21st century challenges.