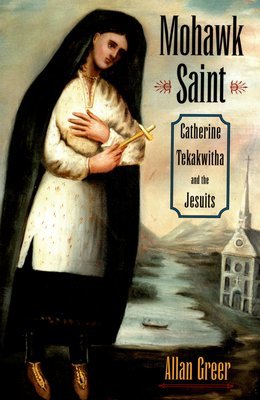 The daughter of a Algonquin mother and an Iroquois father, Catherine/Kateri Tekakwitha (1656-1680) has become known over the centuries as a Catholic convert so holy that, almost immediately upon her death, she became the object of a cult. Today she is revered as a patron saint by Native Americans and the patroness of ecology and the environment by Catholics more generally, the first Native North American proposed for sainthood. Tekakwitha was born at a time of cataclysmic change, as Native Americans of the northeast experienced the effects of European contact and colonization. A convert to Catholicism in the 1670s, she embarked on a physically and mentally grueling program of self-denial, aiming to capture the spiritual power of the newcomers from across the sea. Her story intersects with that of Claude Chauchetiere, a French Jesuit of mystical tendencies who came to America hoping to rescue savages from sin and paganism. But it was Claude himself who needed help to face down his own despair. He became convinced that Tekakwitha was a genuine saint and that conviction gave meaning to his life. Though she lived until just 24, Tekakwithas severe penances and vivid visions were so pronounced that Chauchetiere wrote an elegiac hagiography shortly after her death. With this richly crafted study, Allan Greer has written a dual biography of Tekakwitha and Chauchetiere, unpacking their cultures in Native America and in France. He examines the missionary and conversion activities of the Jesuits in Canada, and explains the Indian religious practices that interweave with converts Catholic practices. He also relates how Tekakwithas legend spread through the hagiographies and to areas of the United States, Canada, Europe, and Mexico in the centuries since her death. The book also explores issues of body and soul, illness and healing, sexuality and celibacy, as revealed in the lives of a man and a woman, from profoundly different worlds, who met centuries ago in the remote Mohawk village of Kahnawake.