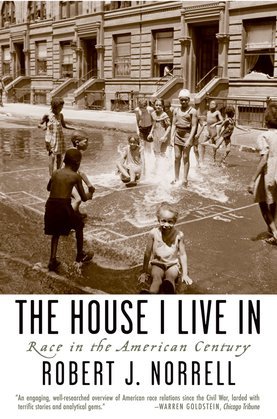 The House I Live In: Race in the American Century

In The House I Live In, award-winning historian Robert J. Norrell offers a truly masterful chronicle of American race relations over the last one hundred and fifty years.
This scrupulously fair and insightful narrative--the most ambitious and wide-ranging history of its kind--sheds new light on the ideologies, from white supremacy to black nationalism, that have shaped race relations since the Civil War. For, Norrell argues, it is ideology, more than politics or economics, that has powerfully sculpted the landscape of race in America. Beginning with Reconstruction, Norrell shows how the democratic values of liberty and equality were infused with new meaning by Abraham Lincoln, yet soon became meaningless for generations of African Americans, as white supremacy drove a wedge between the races. Indeed, the heart of this book paints a vivid portrait of the long, dangerous struggle of African Americans to defeat this pernicious mode of thought. Along the way, Norrell offers fresh and at times controversial appraisals of figures such as Booker T. Washington, W.E.B. Du Bois, and Martin Luther King, Jr., and dissects the ideas of racists such as novelist Thomas Dixon. Most important, he offers striking new insights into black-white history, observing for instance that the Civil Rights movement really began as early as the 1930s, and that contrary to much recent writing, the Cold War was a setback rather than a boost to the quest for racial justice. He also breaks new ground on the role of popular culture and mass media in first promoting, but later helping defeat, notions of white supremacy.
Though the struggle for equality is far from over, Norrell writes that today we are closer than ever to fulfilling the promise of our democratic values, a promise first made by Lincoln at the battlefield of Gettysburg.