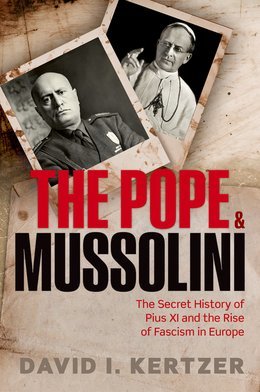 The Pope and Mussolini: The Secret History of Pius XI and the Rise of Fascism in Europe

This is the compelling story of Pope Pius XIs secret relations with Benito Mussolini. A ground-breaking work, based on seven years of research in the Vatican and Fascist archives by US National Book Award-finalist David Kertzer, it will forever change our understanding of the Vaticans role in the rise of Fascism in Europe. Both Pope Pius XI and Mussolini came to power in Rome in 1922. One was scholarly and devout, the other a violent bully. Yet they also had traits in common. Both had explosive tempers. Both bristled at the charge of being the patsy of the other. Both demanded unquestioned obedience from their subordinates, whose knees literally quaked in fear of provoking their wrath. Both came to be disillusioned by the other, yet dreaded what would happen if their alliance were to end. The book unravels for the first time the key role played between pope and dictator by the shadowy Jesuit go-between, dubbed Mussolinis Rasputin. It also reveals the details of the secret agreement worked out by Mussolini with the popes personal envoy, offering Vatican support for Italys notorious, anti-Semitic racial laws. And dramatic new light is shed on the controversial figure of Eugenio Pacelli, who (as Pope Pius XII) would later come to be idolized by some and reviled by others forhis silence during the Holocaust. In his role as Vatican Secretary of State, Pacelli had to struggle to keep the popes explosive temper from leading to a break with both Mussolini and Nazi Germany, as the Italian dictator increasingly embraced the German Fuehrer, whom Pius detested. With the recent opening of the Vatican archives covering Pius XIs papacy, the full story of the two mens relationship can now be told for the first time. It is an account that destroys the widely accepted myth of a heroic Church doing battle with the Fascist regime. On the contrary, as David Kertzer shows, Mussolini would not have been able to impose his dictatorship on Italy without the popes support. In exchange, the pope expected Mussolini to use his repressive reach to enforce Catholicmorality - and return the Church to a position of power in Italy.