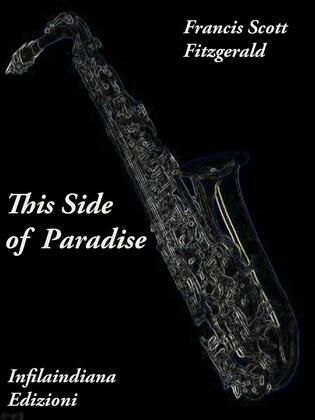 This Side of Paradise is a novel that influenced an entire American generation, and not only. Published in 1920, it represents very well the young people that lived between the two World Wars. The age is the one that Fitzgerald himself calls the Jazz Age. The main character is a charming and snobbish boy that, after a carefree adolescence, suddenly matures because of the war, his mother’s death and other stinging delusions. This Side of Paradise is a novel addressed to young people and , therefore, still up-to-date and enjoyable.

“Early April slipped by in a haze--a haze of long evenings on the club veranda with the graphophone playing "Poor Butterfly" inside… for "Poor Butterfly" had been the song of that last year.”

Francis Scott Fitzgerald was born in 1896 in St. Paul, Minnesota. He doesn't finish his studies but he joins the Army during the Great War. Fitzgerald marries Zelda Sayre, a charming and captivating woman. His novels include: The Great Gatsby, The Beautiful and Damned, Tales of the Jazz Age. Hit by a heart attack in 1940, he dies alone and alcoholic in Hollywood.