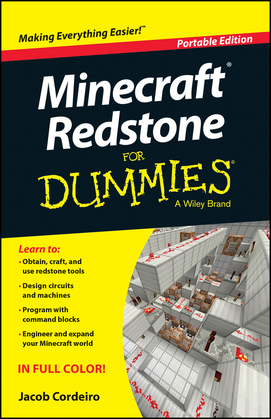 by Jacob Cordeiro (Author)
Buy for $8.00 Excerpt
Nonfiction Juvenile Games & activities Video & electronic games Computers Programming
warning_amber
One or more licenses for this book have been acquired by your organisation details

Minecraft Redstone For Dummies is the complete guide to finding, using, and maximizing the power of redstone in the Minecraft world. This key element is essential for crafting and brewing, and can be placed on the ground as redstone dust – a flat, transparent block that can transmit redstone power, the major component of most redstone circuits. Written by a recognized Minecraft expert, this useful guide walks you through mining, smelting, and other methods of obtaining redstone, and teaches you how to make the most of your redstone stores. Craft a compass, piston, lamp, or torch, brew a potion that reverts to Level 1, or turn it to dust to help find nearby power components. Whether you're in Creative or Survival mode, redstone mastery is crucial for successful gameplay.

Minecraft is a worldwide phenomenon, boasting over 100 million players from around the world. While gameplay varies according to player preference, redstone remains a central element that allows players to build, brew and create as they advance through the biomes. Minecraft Redstone For Dummies teaches you everything you need to know about redstone, including how to get it and how best to use it.

Don't be content to acquire what you stumble across. Redstone's versatility makes it an indispensable resource in the Minecraft world, and knowing where to find it and how to use it efficiently can make all the difference in your gameplay. If you're ready to level up, Minecraft Redstone For Dummies will make you a redstone guru in no time.