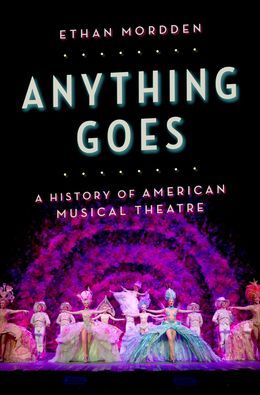 Anything Goes: A History of American Musical Theatre

Ethan Mordden has been hailed as "a sharp-eared listener and a discerning critic," by Opera News, which compares his books to "dinner with a knowledgeable, garrulous companion." The "preeminent historian of the American musical" (New York Times), he "brings boundless energy and enthusiasm buttressed by an arsenal of smart anecdotes" (Wall Street Journal). Now Mordden offers an entirely fresh and infectiously delightful history of American musical theatre.
Anything Goes stages a grand revue of the musical from the 1700s through to the present day, narrated in Mordden's famously witty, scholarly, and conversational style. He places us in a bare rehearsal room as the cast of Oklahoma! changes history by psychoanalyzing the plot in the greatest of the musical's many Dream Ballets. And he gives us tickets for orchestra seats on opening night-raising the curtain on the pleasures of Victor Herbert's The Red Mill and the thrill of Porgy and Bess. Mordden examines the music, of course, but also more neglected elements. Dance was once considered as crucial as song; he follows it from the nineteenth century's zany hoofing to tap "combinations" of the 1920s, from the injection of ballet and modern dance in the 1930s and '40s to the innovations of Bob Fosse. He also explores the changing structure of musical comedy and operetta, and the evolution of the role of the star. Fred Stone, the avuncular Scarecrow in the Wizard of Oz, seldom varied his acting from part to part; but the versatile Ethel Merman turned the headlining role inside out in Gypsy, playing a character who was selfish, fierce, and destructive.
From "ballad opera" to burlesque, from Fiddler on the Roof to Rent, the history and lore of the musical unfolds here in a performance worthy of a standing ovation.