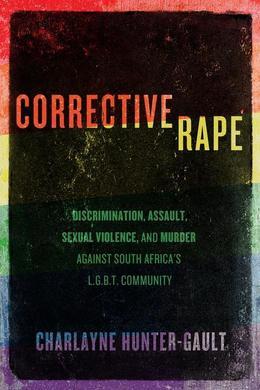 by Charlayne Hunter-Gault (Author)
Non-Fiction Social science Sociology Criminology
In this investigation of sexual violence against LGBTI individuals in South Africa, esteemed journalist Charlayne Hunter-Gault sheds light on practices of "corrective rape" — an assault in which a man rapes a lesbian in an attempt to “cure” her sexual orientation. This book examines the wider social context of anti-LGBTI sentiment in South Africa, a country that was the first in the world to include constitutional language forbidding discrimination on the ground of sexual orientation, and the search for equality in a post-apartheid nation. Hunter-Gault interviews sexual assault victims and explores South Africa's problem of sexual violence — particularly against black lesbians — within the lens of the country's complicated history towards human rights.

Based on a 2012 article the author originally published in the New Yorker, this book features an extensive amount of new material with updated historical perspective, interviews, and case studies. Corrective Rape is a critically important and eye-opening account of a devastating problem within one of Africa's most populous and economically advanced nations.

Anyone concerned with the rights of individuals in the gay and lesbian community, as well as human rights in general around the world, needs to be informed on this topic. Hunter-Gault, an award-winning journalist with years of experience reporting on civil rights and injustice around the globe, has crafted an engaging, fast-paced read that will spur dialogue and inspire action.