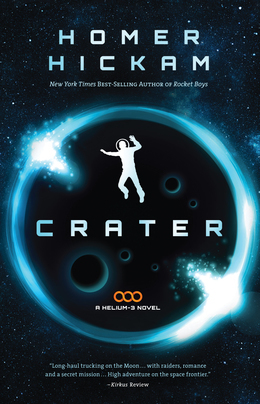 A MINING COLONY ON THE MOON. A DEADLY MISSION. AND A SECRET BIGGER THAN TWO WORLDS.

It’s the 22nd Century. A tough, pioneering people mine the moon for Helium-3 to produce energy for a desperate, war-torn Earth.

Sixteen-year-old Crater Trueblood loves his job as a Helium-3 miner. But when he saves a fellow miner, his life changes forever. Impressed by his heroism, the owner of the mine orders Crater to undertake a dangerous mission. Crater doubts himself, but has no choice. He must go.

With the help of Maria, the mine owner’s frustrating but gorgeous granddaughter, and his gillie—a sentient and sometimes insubordinate clump of slime mold cells—Crater must fight both human and subhuman enemies. He’ll battle his way across a thousand miles of deadly lunar terrain and face genetically altered super warriors in his quest to recover an astonishing object that will alter the lives of everyone on the moon.

“Long-haul trucking on the Moon . . . with raiders, romance and a secret mission . . . High adventure on the space frontier.” —Kirkus Reviews