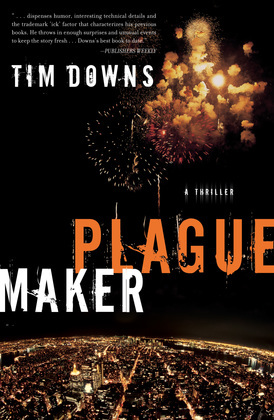 Hundreds of thousands line the banks of the East and Hudson Rivers awaiting the nation’s largest fireworks display. Soon the sky will explode in cascading showers of silver and gold. Everywhere, faces will turn skyward in wide-eyed wonder.

Then the sky will grow dark again—but it will not be empty. The air will be filled with clouds of smoke and specks of debris will rain down everywhere. Some will pick bits of paper from their children’s hair. Some will brush away still-burning sparks or embers. And some will absentmindedly scratch at the tiny, biting specks that dot their necks and arms.

That’s what FBI agent Nathan Donovan must decide. When he is forced to enlist the help of ex-wife Macy Monroe, and expert in the psychology of terrorism, the fireworks really begin—but she may be the only one who can help him stop the Plague maker in time.

“Plague Maker is a novel that can proudly be shelved beside any [book] featuring Crichton or Clancy and hold its own.”