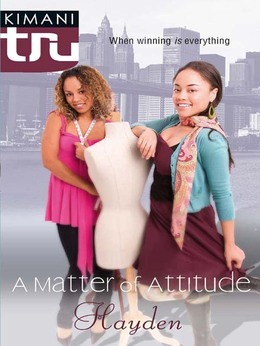 A Matter of Attitude

Fashionista with the fiercest style sense and head-turning clothes? That’s Angela Jenkins. Even though her cutting-edge designs and graphic legwear sometimes draw criticism from her peers, Angela knows that one day she will be a top designer, and her best friend at Kressler High, Adrian Gomez, is her biggest supporter. But at fifteen, how is anyone (like the extremely cute JaRoli Spencer) supposed to check her out when she’s stuck working at her family’s Caribbean-style restaurant all the time? The answer: getting elected director of her school’s holiday fashion show.

But Angela’s got designer-clad competition: the very popular Karen Frasier, who has it all—including JaRoli. So when Shayla Mercer, the girl with the toughest street rep, offers to make sure Angela wins—for a fee—

Angela says yes. And she learns that the price of popularity can be too high.