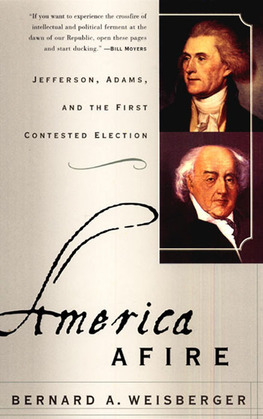 America Afire is the powerful story of the election of 1800, arguably the most important election in America's history and certainly one of the most hotly disputed. Former allies Adams and Jefferson, president versus vice president, Federalist versus Republican, squared off in a vicious contest that resulted in broken friendships, scandals, riots, slander, and jailings in the fourth presidential election under the Constitution.

The election of 1800 (not unlike that of 2000) was a tumultuous one, replete with an attempt to steal the victory from a controversial winner; deadlocked parties hell-bent on success; and a nation divided. Thomas Jefferson vs. John Adams—one of the most slanderous campaigns in the history of the nation. Added to that were backroom connivings and threatened riots serious enough to badly bend a young and shaky electoral system.

The election ended in a tie—between the Presidential and Vice-Presidential candidates. After 7 straight days of voting in the Congress, Jefferson finally became president. America Afire is a timely tale that not only enlightens and entertains, but reassures us of the continuity and durability of our institutions.