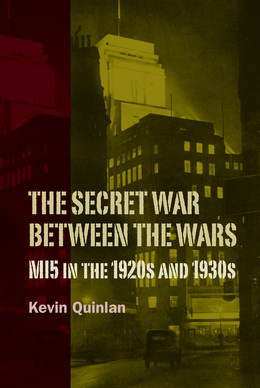 by Kevin Quinlan (Author)
Non-Fiction History 1945-1989 Social science Political science Political Freedom & Security Intelligence
Even though the First World War had ended, the battle against Britain's enemies continued unabated during the period of the 1920s and 1930s. Buffeted by political interference and often fighting for their very survival, Britain's intelligence services turned to fight a new, clandestine war against rising powers Soviet Russia and Nazi Germany.
Using recently declassified files of the British Security Service (MI5), The Secret War Between the Wars details the operations and tradecraft of British intelligence to thwart Communist revolutionaries, Soviet agents, and Nazi sympathizers during the interwar period. This new study charts the development of British intelligence methods and policies in the early twentieth century and illuminates the fraught path of intelligence leading to the Second World War. An analysis of Britain's most riveting interwar espionage cases tells the story of Britain's transition between peace and war.
The methods developed by British intelligence in the early twentieth century continue to resonate today. Much like now, the intelligence activity of the British in the pre-Second World War era focused on immediate threats posed by subversive, clandestine networks against a backdrop of shifting great power politics. As Western countries continue to face the challenge of terrorism, and in an era of geopolitical change heralded by the rise of China and the resurgence of Russia, a return to the past may provide context for a better understanding of the future.

Kevin Quinlan received his PhD in History from the University of Cambridge. He lives and works in Washington, DC.