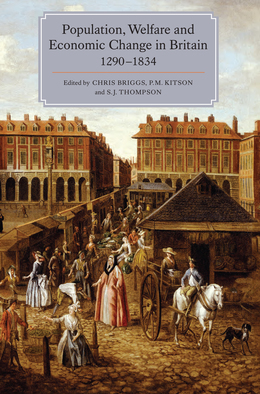 by Chris Briggs (Editor), P.M. Kitson (Editor), S.J. Thompson (Editor)
Buy for $23.74 Excerpt
Nonfiction Social science Demography Business & economics Economic history History Other Social history
warning_amber
One or more licenses for this book have been acquired by your organisation details
Population, Welfare and Economic Change presents the latest research on the causes and consequences of British population change from the medieval period to the eve of the Industrial Revolution, in both town and countryside. Its overarching concern is with the economic and demographic decision-making of individuals and groups and the extent to which these were constrained by institutions and resources. Within this, the volume's particular focus is on population growth: its causes and the welfare challenges it posed. Several chapters investigate the success with which the English Old Poor Law provided care for the poor and elderly, and new work on alternative welfare institutions, such as almshouses, is also presented.
A further distinctive feature of this book is its comparative perspective. By making systematic comparisons between economic and demographic developments in pre-industrial Britain and those taking place in various regions of contemporary Continental Europe and Russia, several chapters uncover how far Britain in this period was 'different'. Stimulating to experts and students alike, Population, Welfare and Economic Change offers overviews and summaries of the latest scholarship by leading economic historians and historical demographers, alongside detailed case studies which showcase the original research of younger scholars.

Chris Briggs is Lecturer in Medieval British Economic and Social History at the University of Cambridge and a Fellow of Selwyn College. P.M. Kitson is a former Research Associate at the Cambridge Group for the History of Population and Social Structure and Bye-Fellow of Downing College, Cambridge. S.J. Thompson is a former J.H. Plumb Fellow and Director of Studies in History at Christ's College, Cambridge.