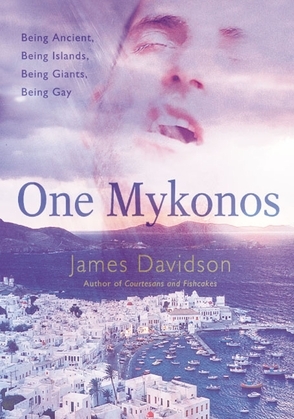 The Giants were the cousins of the Olympians, who rebelled and were defeated. "When all the gods had slaked their thirst for particular vengeance there were still a few Giants left over, dead in all their various shapes and sizes. Hercules looked around a bit to see if anyone was looking, then brushed them all under one Mykonos."

In antiquity, Mykonos had little going for it, apart from being the sibling island to Delos, birthplace of Apollo. The Persians regrouped there after their defeat in 490 BCE at Marathon. Throughout most of the first 1000 years CE regular pillaging by the Turks impoverished the inhabitants. With its labrynthine streets and minimal buildings, it became a haven, hiding spies all the way up through the Napoleonic and First World Wars.

James Davidson, a brilliant young classical scholar, visited Mykonos for the gay Festival of the Twelve Gods and found it a hedonistic paradise. Although he is in modern Mykonos, ancient Mykonos' history and mythology periodically consume the narrative, asserting their influence and power. Part travelogue, part classical history, part personal essay, part mythology, this is a witty and fascinating gem of a book.