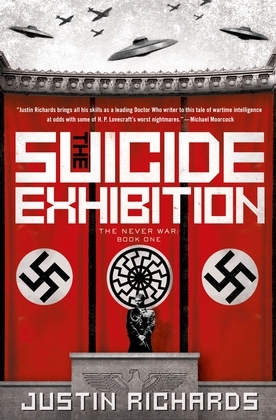 The threat is not new. The aliens have been here before.

The German war machine has woken an ancient threat - the alien Vril and their Ubermensch have returned. With this new power, ultimate Victory in the war for Europe is now within the Nazis' grasp.Obsessed with the Occult, Hitler and other senior Nazis believed they were destined to inherit the Earth. To this end, they are determined to recover 'their' ancient artifacts -- the Ark of the Covenant, the Holy Grail, the Spear of Destiny. When Dunkirk veteran and Foreign Office trouble-shooter Major Guy Pentecross stumbles across a seemingly unbelievable conspiracy, he, together with pilot and American spy Sarah Diamond and SOE operative Leo Davenport, enter the shadow world of Section Z. All three have major roles to play as they uncover the Nazis' insidious plot to use the Vril's technology to win the war... at any cost.

Justin Richards has an extremely credible grasp of WWII history and has transformed it into a groundbreaking alternate reality thriller in The Suicide Exhibition.