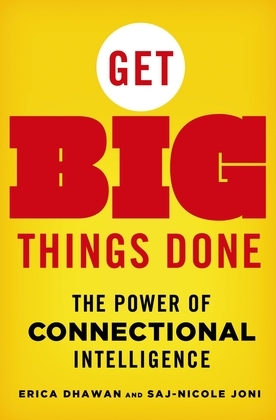 Connectional Intelligence unlocks the 21st-century secret to getting "big things done," regardless of who you are, where you live, or what you do.

We typically associate success and leadership with smarts, passion and luck. But in today's hypercompetitive world, even those gifts aren't enough. Get Big Things Done argues that the game changer is a thoroughly modern skill called Connectional Intelligence. Virtually anyone can maximize his or her potential, and achieve breakthrough performance, by developing this crucial ability.

Can a small-town pumpkin grower affect the global food crisis? A Fortune 500 executive change her company's outdated culture through video storytelling? A hip-hop artist launch an international happiness movement? Or a scientist use virtual reality games to lower pain for burn victims? The answer, you'll read, is a resounding yes. Each of these individuals is using Connectional Intelligence to become a power player to get big things done.

Erica Dhawan and Saj-nicole Joni's Get Big Things Done unlocks the secrets of how the world's movers and shakers use Connectional Intelligence to achieve their personal and professional goals--no matter how ambitious.