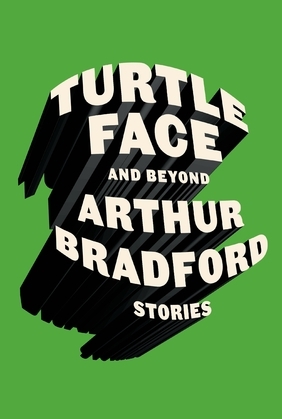 Paddling down a remote, meandering river, Georgie's friend Otto decides to do something both spectacular and stupid: He scales a sandy cliff that rises from the water and runs down its steep face, preparing for a triumphant running dive. As his friends look on, they watch something awful unfold: Otto lands with an odd smack and knocks himself unconscious, blood spilling from his nose and mouth. Georgie arrives on the scene first and sees a small turtle, its shell cracked, floating just below the water's surface.
Otto and the turtle survive the collision, though both need help, and Georgie finds his compassions torn. This title story sets the tone for the rest of Arthur Bradford's Turtleface and Beyond, a strangely funny collection featuring prosthetically limbed lovers, a snakebitten hitchhiker turned wedding crasher, a lawyer at the end of his rope, a ménage à trois at Thailand's Resort Tik Tok, and a whole host of near disasters, narrow escapes, and complicated victories, all narrated by Georgie, who struggles with his poor decisions but finds redemption in the telling of each of his tales. Big-hearted and hilariously high-fueled, Turtleface and Beyond marks the return of a beloved and unforgettable voice in fiction.