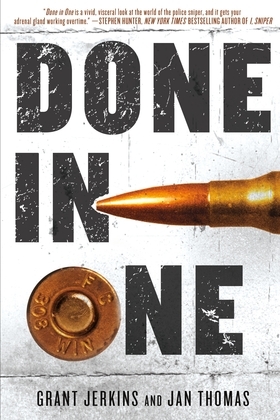 One bullet equals one kill.

For SWAT sniper Jake Denton, the bullet casings he saves as grim reminders of his "kills" are beginning to add up. His wife, his department-ordered psychiatrist, and even Jake himself are all beginning to question just how these sanctioned kills are affecting his mental health. Nobody wants him to end up like Lee Staley, his mentor and ex-partner---now out on permanent psych leave, drinking himself to death, and the prime suspect in a series of shootings that have paralyzed Northern California.

On every police force in the country, there's a SWAT sniper going about his daily life, acting like an average cop, until the moment when the call comes in. Then they become a hostage's last hope and a criminal's worst nightmare. To some, they are silent heroes---to others, silent killers. Grant Jerkins and Jan Thomas's Done in One pulls back the curtain on their world.